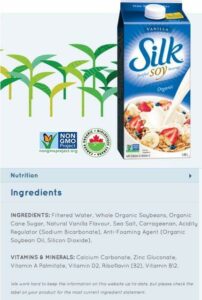 When WhiteWave Foods Company was separated from agribusiness giant Dean Foods in 2013, I had high hopes that the mission of the company would go back to the founding days when Steve Demos started the company in Boulder, Colorado and brought the Silk® organic soymilk brand to the market in 1996. At the beginning, as Director of Nutrition for King Kullen Grocery Company in New York, I was excited to work with this independent company that was one of the pioneers in the organic foods industry. I was proud to help this company with nutrition labeling requirements, and educated supermarket buyers and consumers about why natural and organic products such as Silk®, would help to improve the health of our nation.

In 2002, Whitewave, the parent company of Silk® organic soymilk was sold and became a wholly-owned subsidiary of Dean Foods, the largest processor and direct-to-store distributor of conventional fluid milk in the U.S. Then in 2004, Dean Foods acquired Horizon Organic Holding Corporation, maker of organic milk and dairy products and consolidated Silk®, Horizon Organic® and other branded businesses as WhiteWave Foods Company.

With the financial support of Dean Foods, the WhiteWave product line began to grow, but business practices began to change. Most notably, Whitewave moved away from a commitment to use 100 percent organic ingredients. It substituted conventional and imported soybeans for organic soybeans from USDA-certified organic farms that it had previously used when it was an independent company. This move resulted in significantly reduced costs of production and increased product line profits. With a total lack of transparency, Whitewave failed to notify consumers and retailers about this change in product formulation, other than with a minor wording change on its product packaging.

In 2009 the Organic Consumers Association (OCA) called for a boycott of Silk® brand products. The OCA reported that a portion of the soybeans used in Silk® was sourced from countries with unacceptable labor and certification standards, including Brazil and China. The OCA also called for boycotts of Horizon Organic brand milk, as well as foods from other subsidiaries of Silk’s former distributor Dean Foods. In the fall of 2009 the Pioneer Press reported that the Cornucopia Institute, a U.S. agriculture and food watchdog agency had made complaints to the U.S. Department of Agriculture accusing Silk® producer Dean Foods and its WhiteWave Foods division, of shifting their products away from organics without properly notifying retailers or consumers. According to the Star Telegram and other news sources, Silk® brand soy milk was made using organic soybeans until early 2009 when Dean Foods switched to conventional soybeans while maintaining the same UPC barcodes and prices on the Silk® products while replacing the word “organic” with “natural” on the Silk® product packaging.

As of today, only three out of the eleven Silk® soymilk products are organic even though the conventional packaging is almost identical to the organic packaging. Silk® does not share information about the percentage of imported versus domestic soybeans used to make its conventional products. Whitewave brand extensions, which include Silk® Coconutmilk, Cashewmilk and Almondmilk are not organic. However, the website states that the company is committed to being GMO-free. (GMO means genetically modified organisms.)

Even more disturbing is that according to the Organic Consumers website:

I recently uncovered another example of non-transparency by WhiteWave while reading the Silk® organic vanilla soymilk ingredient label in Canada. Silicon dioxide, a synthetic chemical is listed as an anti-foaming agent. The information below is taken directly from the company’s Canadian website in reference to Silk® Organic Vanilla Soymilk.

We work hard to keep the information on this website up-to-date, but please check the label on your product for the most current ingredient statement.

In the U.S., silicon dioxide is Generally Recognized As Safe (GRAS listed) and is widely used in many food and beverage applications for its anti-caking and anti-foaming properties. It is commonly used in the manufacturing of dried fruit and vegetable powders, ground chili products, fish oil, soup powders, sugars, cake mixes, non-dairy creamers, salt, spices, hot chocolate, and many yeast/flour-based powdered mixes. It is a permitted food additive in Canada, the U.K. and Europe and also used in cosmetics, Silly Putty, insect repellant and a host of other consumer goods.

Silicon dioxide occurs naturally as silica, which are shells of tiny single-celled algae, also known as sand or beach sand. However, when used as an anti-foaming agent it is made into a silicone-based synthetic chemical. Defoamer or anti-foaming agent controls or stabilizes foam that is produced during food and beverage processing. Silicon dioxide anti-foamer plays a role in a mass market food manufacturing system, which results in faster production and packaging. In the U.S., it is regulated under 21 CFR 173.340 “Defoaming agents”. (CFR is the U.S. Code of Federal Regulations.)

On May 28, 2013, the U.S. Department of Agriculture’s National Organic Program (N.O.P.) reported changes to its National List of Allowed and Prohibited Substances in the Federal Register. The N.O.P. permitted silicon dioxide as a defoamer and for other uses when organic rice hulls are not commercially available. The amendment became effective Nov. 3, 2013.

According to Steve Pierce, president of St. Louis based Ribus, maker of commercial organic rice hulls, “the Organic Foods Production Act of 1990 and U.S.D.A. regulations prohibit the use of any substances in organic production and processing that do not comply with this list, and we are thrilled that silicon dioxide is now on the prohibited list in most cases.”

Another chemical company, Magrabar offers a range of defoamers for soymilk and tofu processing. According to their website, the base chemistry can be selected from silicone oil, mineral oil, or standard, traceable non‐GMO, or certified organic vegetable oils, depending on the product requirements.

So why hasn’t Silk® made the switch to an organic anti-foaming agent? Of course, my first call was to its parent company Whitewave Foods and I spoke to a number of employees working with the Silk® brand at its Broomfield, Colorado headquarters.

First, I wasn’t sure if Silk® Vanilla Organic Soymilk in Canada used the same formulation as the U.S. packaged product. I was told that the only difference “they were aware of” was in nutrient fortification since Canadian food law has different requirements for fortification when making health claims. I asked if silicon dioxide was used as an anti-foaming agent in the U.S. formula and was told that this information was proprietary. In the U.S., ingredients used during processing are normally not required on the ingredient label. Canada may have different food labeling requirements.

According to The Vegetarian Resource Group, processing aids, used during the commercial processing of an ingredient, may be unknown or vary from manufacturer to manufacturer. A common example is cattle bone char used to decolorize cane sugar. Consumers can inquire about processing aids when in doubt. In many cases, manufacturers do not have to list processing aids on food labels. Only careful research may reveal their presence. Manufacturers may call them “proprietary.”

A key employee at Organic Valley, a major U.S. competitor of Silk® emphatically reported to me that there are no anti-foaming agents used in the production of its soymilk. They produce 100 percent organic soymilk from USDA certified organic farms owned by their farmers. Being a U.S. farm cooperative, they do not source soybeans from China or any other foreign country. The company website explains how Organic Valley soymilk is produced using the whole bean.

I reached out to The Hain Celestial Group, regarding production of its WestSoy® and a customer care representative emailed me the following response:

Thank you for taking the time to contact us reading our WestSoy® Plus Plain Soymilk.

We do not use an anti-foaming agent in the processing of soymilk.

Here is the correspondence I received from Customer Information at Whole Foods Market, Global Office:

In addition to Organic Valley, Eden Foods, deserves recognition for its exemplary practices in full and open disclosure of its practices on its company website. Edensoy does not use anti-foaming agents. According to the company website: Vanilla EDENSOY Extra is the only U.S.A. soymilk with 100% real, pure vanilla extract and fortified with the finest bio-available vegan quality vitamins and calcium. While it created the category in 1983, EDENSOY remains the only soymilk properly prepared to nurture human beings. Eden selected organic ingredients, reverse osmosis purified water, 240 continuous quality control checks, and years of study on how to best prepare soybeans for human assimilation, assures the best possible, most pleasing nourishment in soymilk. It rates number one of sixty-two brands in an extensively researched soy report. Only gentle unrefined sweeteners are used. Ecological aseptic cartons, and it “Promotes Cardiovascular Health*.”  All of the Edensoy products are organic.

The bottom line is that all natural food companies should be fully transparent in their practices. Consumers are more sophisticated than ever, and have the right to know how food is processed and handled until it makes it to their table.  We have the right to know what’s in our food every step of the way (including honest labeling). It’s called the Clean Food Movement or Food Democracy and if we are spending more money on organic and natural foods, then we expect even more.

As a side note: A silicone-based anti-foaming agent called dimethylpolysiloxane is found on many fast-food ingredient lists and is used to stop fryer oil from foaming. McDonald’s Filet-O-Fish and French fries have it, as do Wendy’s Natural-Cut Fries With Sea Salt. Most fast-food items in the U.S. that are cooked in a deep-fat fryer contain dimethylpolysiloxane. However, the British banned it from their McNuggets.

Let’s hope that WhiteWave Foods Company, now independent of Dean Foods, turns back to founder Steve Demos’ original ideals and commitment to organic food and farming. And in doing so, cleans up their act and takes responsibility to make business decisions in the best interest of the consumer’s health, rather than to deepen the pockets of its investors. Obviously, according to other plant-based beverage manufacturers, anti-foaming agent is not needed. So why not be totally transparent and answer a consumer’s question rather than hide behind the veil of a proprietary secret?

COMPANY INFORMATION about Whitewave Foods Company, maker of Silk® and other brands sold in the U.S, Canada, Europe and China:

Pick up a copy of “Beyond The Mediterranean Diet: European Secrets Of The Super-Healthy,” for the simplest way to a healthy lifestyle with a guide to food shopping, dining out featuring 50 easy and delicious recipes for everyday living. 4 years ago
BlogIn The NewsNutrition News

What to Look For On FDA’s New Nutrition Facts Label Gut-Unfriendly Additives Lurking In Organic Soy And Other Plant-Based Milks...