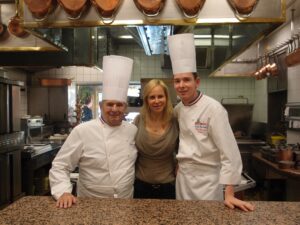 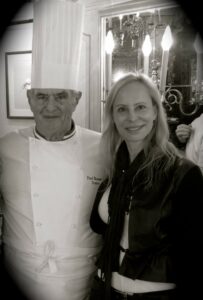 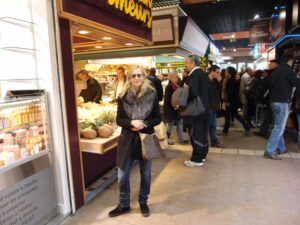 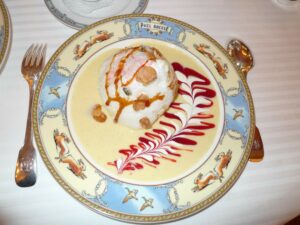 Dining at the magical restaurant of Paul Bocuse aka L’Auberge du Pont de Collonges (and actually schmoozing in French with the most famous chef in the world–Paul Bocuse), in Lyon, France–puts you on the movie set of Ratatouille. Lyon, only about a 1.5 hour drive from Geneva, Switzerland (my expat hometown) hosts the origin of traditional Lyonnaise food. Food is serious in this city thanks to Paul Bocuse and the history of Lyonnaise food. Bring a suitcase for all the gourmet food you will find at Les Halles De Lyon–the most magnificent indoor food market in the center of the city, organized by Bocuse.

I had the honor of spending time with Paul Bocuse on his 86th birthday February 11, 2012 and many other times throughout the two years while living in Geneva, Switzerland. During one visit, I interviewed him with the help of a translator.  It was amazing to hang out in the famed restaurant’s kitchen and converse with the most famous chef in the world-about his viewpoint on diet, nutrition and the French cuisine!

To learn more about Paul Bocuse, Lyon France and other great French chefs who have influenced lightening up traditional Lyonaisse food, read my book: Beyond The Mediterranean Diet: European Secrets Of The Super-Healthy. The photographs are beautiful, recipes delicious and the diet secrets will keep your waist slim and palate happy!