Beyond The Mediterranean Diet-Indie Book Award 2015

“Beyond the Mediterranean Diet” reveals European secrets of the super-healthy

Boulder, Colo. (June 3, 2015) – Beyond The Mediterranean Diet: European Secrets Of The Super-Healthy, by Layne Lieberman, MS, RD, CDN of Boulder, Colo. has been named one of the “Best Indie Books of 2015” by the Independent Book Publishing Professionals Group, as a book that “deserves to reach a wide audience.” Lieberman’s book is a finalist of the Health/Wellness category in the 2015 Next Generation Indie Book Awards, the world’s largest not-for-profit book awards program for independent publishers and self-published authors. The awards were presented on May 27 in a ceremony at New York City’s Harvard Club.

“Our awards program is known as the “Sundance” of the book publishing world,” says Catherine Goulet, Chair of the 2015 Next Generation Indie Book Awards program.

According to Goulet, “Like other independent artists, many indie book publishers face challenges that the industry giants don’t experience. The indies have to work much harder to get their best books into readers’ hands. Authors and publishers who compete in the Next Generation Indie Book Awards are serious about promoting their books,” adds Goulet. “They aim to stand out from the crowd of millions of books in print.”

According to Bowker’s “Books in Print” database, more than 2.3 million books were published or distributed in the United States alone in 2012, the most recent year for which figures are available. A majority of these (more than 2 million books) were “non-traditionally” published, including print on demand and self-published titles. The number of self-published titles produced annually in the U.S. has increased dramatically, growing 437% from 2008 to 2013.

To help indie authors and publishers reach a wider audience, the top 70 books in the 2015 Next Generation Indie Book Awards will be reviewed by New York literary agent Marilyn Allen of Allen O’Shea Literary Agency or one of Allen’s co-agents for possible representation in areas such as distribution, foreign rights, film rights, and other rights.

A complete list of 2015 winners and finalists is available at the Next Generation Indie Book Awards website at http://www.indiebookawards.com/.

Layne Lieberman, MS, RD, CDN, is an award winning registered dietitian and culinary nutritionist, and author of the blog WorldRD. She is a member of the Academy of Nutrition and Dietetics and a passionate consumer advocate and innovator in the food, supermarket, restaurant and health industries.

She and her husband, Michael, live in New York, Vancouver, BC and Boulder, Colo.

About the Literary Agent

Marilyn Allen has over 25 years of sales and marketing experience, including serving as Senior Vice President, Associate Publisher, and Director of Marketing for Harper Collins and directing sales and marketing teams for Simon & Schuster, Penguin Books and Avon Books. Allen has worked with many best-selling authors including Stephen King, Ken Follett, Barbara Kingsolver, John Gray, Mary Higgins Clark, and many more.

Beyond the Mediterranean Diet: European Secrets of the Super Healthy

Illustrated in 4-color throughout

Available online at barnesandnoble.com, Wal-Mart, E-campus, Amazon (US, France, Italy, Spain, Germany, etc.). It is also available on a number of websites in UK, Sweden, Australia, Canada, Slovakia including www.gazellebookservices.co.uk, www.angusrobertson.com.au and on Lieberman’s website www.WorldRD.com. 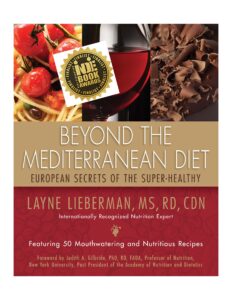 Click here to view the certificate: Award Beyond The Mediterranean Diet 10 Healthy Food Rules To Live By

2 years ago
BlogIn The NewsNutrition News