A diner brings me back to my childhood on Long Island, New York in the late 1960s through the 1970s when I could hardly wait for Wednesday night because that was the night my dad worked late in the city and my mom would take my siblings and me out for dinner to the neighborhood diner. I loved the extensive menu and that I could eat breakfast at dinnertime, which seemed like such a novelty. I vividly recall the turn-style bakery case featuring every cake and pie including seven-layer cake and coconut cream pie. The counter was lined with muffins, danish, bagels and an assortment of cookies including baklava.

Even on family road trips, my dad liked to eat at diners rather than at fast food restaurants. Diners were known to be open 24-7, the food was made to order and the coffee was fresh because of the high turnover.

As I got older– in the 1980s–the diner became the Saturday night hot spot where friends would meet up to munch out after a late night out in the big city. It was a place to be seen!

Today I received an email from my older son with the headline: Breaking chews! Mike Bloomberg’s favorite *coffee shop, Viand, will close Upper East Side location. I read the article in disbelief and felt a pit in my stomach because this too, was my favorite New York diner. (*Before the advent of Starbucks, the terms diner and coffee shop were interchangeable.)

Viand, located on Madison Avenue at 78th street was the place that brought back those childhood memories of eating out with my mom, sister and brother–on those nights when my dad worked late and my mom didn’t want to cook. It was where I took my kids, friends and family to relive and reminisce about those great memories.

We could eggs at dinnertime, an authentic Greek salad at lunchtime or a stack of blueberry pancakes on a late Sunday morning. Angelo, the manager was always there to greet us and the decor was just like it was supposed to be–green booths with a long counter lined with bar stools. The waiters were old-timers–quick on their feet and knew just when to refill our cups and glasses. It was the good old-fashioned Greek diner in our neighborhood!

Viand,  was in business for 47 years! Mayor Bloomberg sat at Booth 14 for breakfast and dinner–he liked his toast well-done and his eggs soft-boiled. Viand, the epitome of a typical New York diner even made jam from scratch that wasn’t too sweet. Turkey sandwiches were made from freshly roasted turkey breast without too much salt. It was simple, homemade comfort food–no cute marketing angles or fancy preparations and certainly no chef-inspired creations!

I was supposed to head out of New York this afternoon but because of flight delays due to bad weather in Denver, I decided to postpone my flight until tomorrow. Maybe subconsciously, I knew I had to have one last supper at Viand because it was closing tomorrow.

I went by after a walk in Central Park and hugged the employees that I’ve come accustomed to for so many years. The busboy said he had two bits of bad news this week–the closing of Viand and the death of his mom in Mexico. In his broken English, he told me that he was going to interview at another diner tomorrow and hoped that he would be working by Monday. He had been working at Viand for ten years. I consoled and told him that he was a pro and would have no trouble getting a job. He was so thankful for the encouragement.

I was grateful to enjoy the last supper at Viand with a delicious light-on-the-feta, spinach, egg white omelet (no butter, no oil) and perfectly toasted 7-grain bread with homemade jam. Miguel packed up a white paper bag with lots of extra jam so that I could take some home. 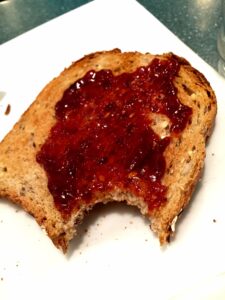 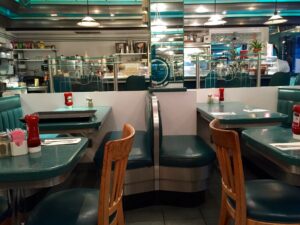 Inside Viand on 78th and Madison Ave, NYC 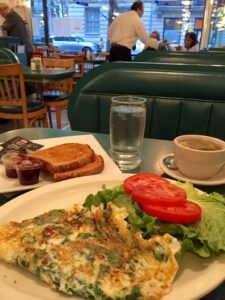 The reality is that diners can’t afford to pay high rent prices without a large volume of business. With so many options, people choose fast food over diners, which has hurt the business.

Blog by Culinary Nutritionist Layne Lieberman, RD, MS, CDN, Author of Beyond The Mediterranean Diet: European Secrets Of The Super-Healthy.