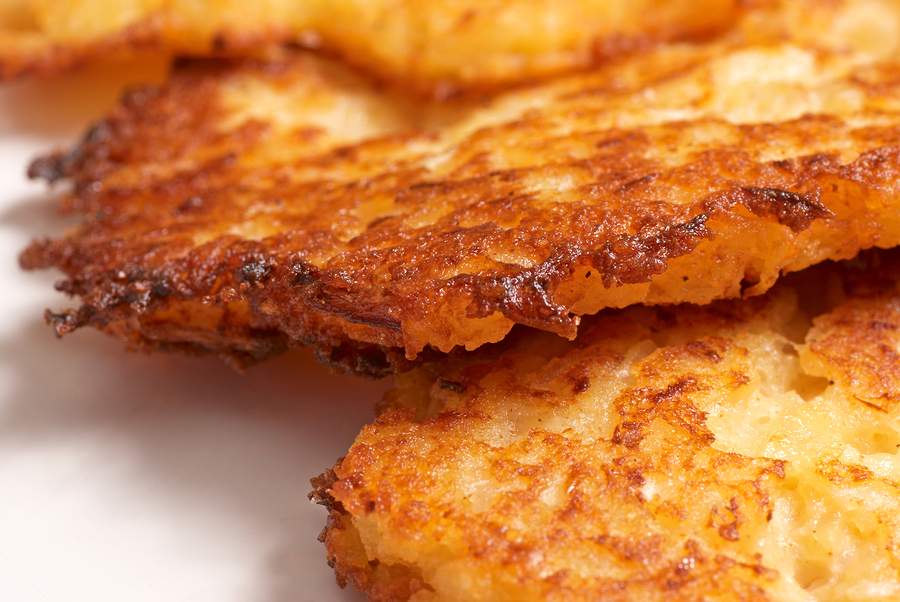 Latkes (fried potato pancakes) are traditional, topped with applesauce or sour cream. The custom of serving fried foods symbolizes the miracle of Hanukkah, which centered around oil lasting for eight days.  Even though it’s customary to fry foods on this holiday, it’s healthier to bake the latkes–less fat and calories.  I like to add grated apples for a touch of natural sweetness.

Use Organic Ingredients When Available:

Directions
Preheat oven to 400 degrees Fahrenheit (205 Celsius). Coarsely grate the potatoes, onion and apple by hand. Place in a cheesecloth and wring, extracting as much moisture as possible. Place the potato mixture into a large bowl and fold in the eggs, sea salt and pepper. Spray a large rimmed  baking sheet with olive oil cooking spray. Place large spoonfuls of the potato mixture onto the baking sheet, pressing down on them to form ½-inch thick patties; 3-inch rounds. Leave about an inch between the patties. Spray the tops of the latkes with olive oil cooking spray. Bake for 15 to 20 minutes, or until lightly browned and crisp. Makes 15 latkes. Serve with applesauce and reduced fat sour cream (optional).

For delicious and healthy recipes for every meal of the day, check out my award-winning book: Beyond The Mediterranean Diet: European Secrets Of The Super-Healthy. This beautifully photographed book makes a perfect healthy holiday gift!